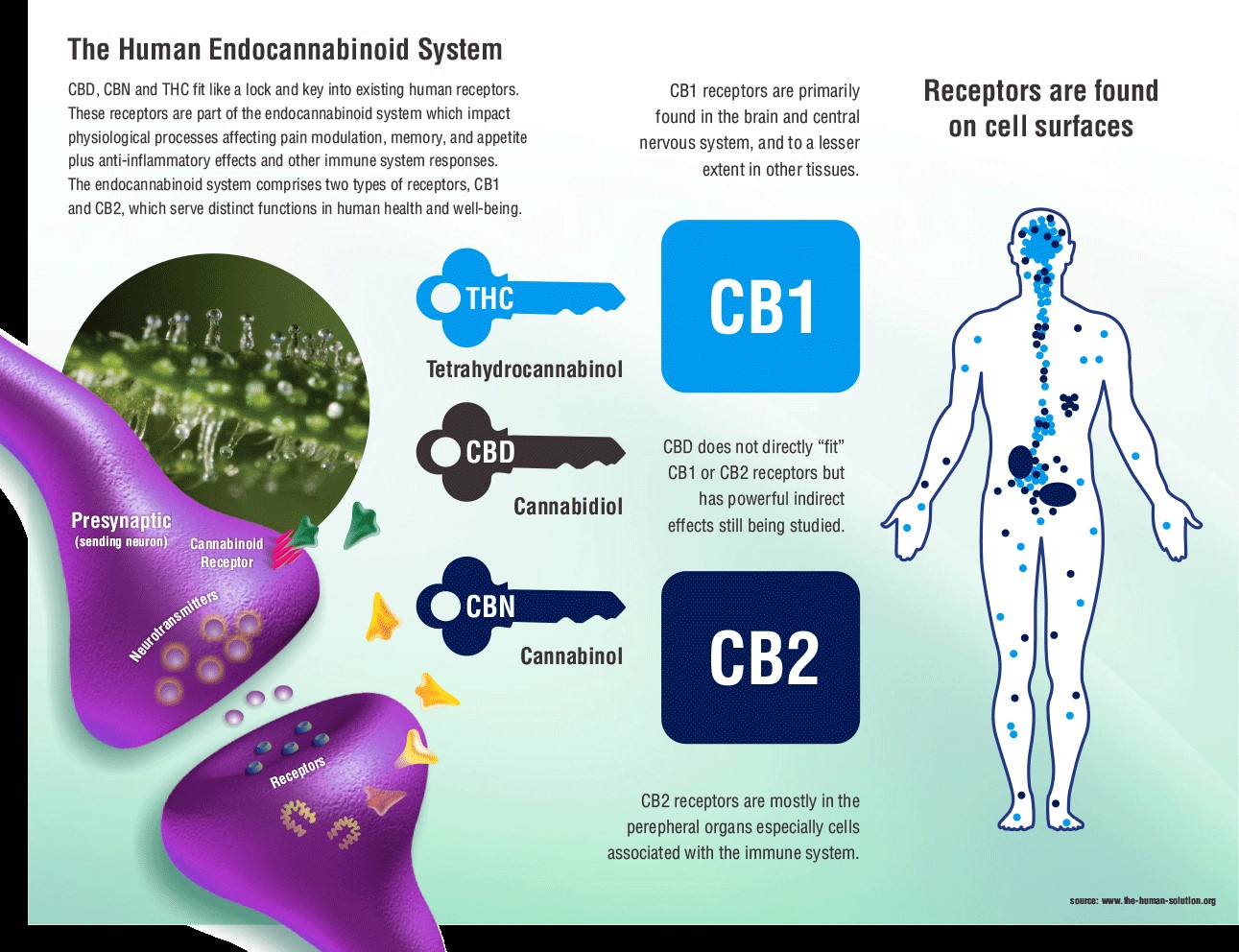 “Homeostasis is the property of a system in which a variable is actively regulated to remain very nearly constant. This regulation occurs inside a defined environment (mostly within a living organism’s body). Examples of homeostasis include the regulation of the body temperature of an animal, the pH of its extracellular fluids, or the concentrations of sodium (Na+) and calcium (Ca2+) ions or of glucose in the blood plasma, despite changes in the animal’s environment, or what it has eaten, or what it is doing (for example, resting or exercising). Each of these variables (for example, body temperature, the pH, or the Na+, Ca2+ and glucose concentrations) is controlled by a separate “homeostat” (or regulator), which, together, maintain life”

The concept was first described in 1865 by French physiologist Claude Bernard and the term “homeostasis” was coined by Walter Bradford Cannon in 1926.

The ECS (endocannabinoid system) operates via a network of cannabinoid receptors, they are imaginatively named CB1 and CB2. CB1 receptors are primarily located in the brain and central nervous system, it is the ‘activation’ of the CB1 receptor by THC that is responsible for many of the therapeutic effects of THC, it is also the mechanism responsible for the psychoactive effects, or high.
There is a lack of CB1 receptors in the part of the brain that regulates heart rate and respiration, therefore (unlike opiate analgesics) THC does not have a lethal dose, a person can consume as much as they require to achieve a beneficial effect. 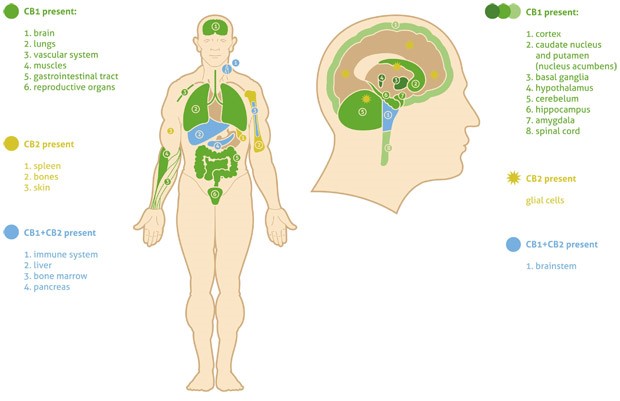 CB2 receptors are primarily found in the immune system with the highest concentration located in the spleen. CB2 receptors are ‘activated’ by the cannabinoid CBD which is a very effective anti-inflammatory agent, another benefit of CBD is that it moderates the psychoactivity of THC.

In human studies, endocannabinoid system deficiencies have been implicated in schizophrenia, migraine, MS, Huntington’s disease, Parkinson’s and irritable bowel syndrome.
Dr Russo’s assertion that a dysfunctional endocannabinoid system in infants contributes to ‘‘failure to thrive’’ syndrome is supported by the work of Dr Melanie Dreher.
“Failure to thrive refers to children whose current weight or rate of weight gain is much lower than that of other children of similar age and gender”

Dr Melanie Dreher studied women using cannabis during their entire pregnancy, and then studied the babies one year after birth. She found that babies of the women who had smoked cannabis daily during their pregnancy socialized more quickly, made eye contact more quickly and were easier to engage.

If it were not for these cannabinoids in breast milk, new-born children would not know how to eat, nor would they necessarily have the desire to eat, which could result in severe malnourishment and even death. New-born children who are breast-fed naturally receive doses of endo-cannabinoids that trigger hunger and promote growth and development. Observations of how babies acts after being fed show they exhibit symptoms of cannabinoid use. As well as the essential function of stimulating an infant’s appetite, cannabinoids also help to calm and relax the baby. Cannabinoids are not, however, present in baby formula, which makes it far more inferior to breast milk.
Furthermore, a study on the endocannabinoid receptor system that was published in the European Journal of Pharmacology reported;
“The medical implications of these novel developments are far reaching and suggest a promising future for cannabinoids in paediatric medicine for conditions including ‘non-organic failure-to-thrive’ and cystic fibrosis.”
This essentially means that the human body requires and produces cannabinoids, as these nutritive substances play a critical role in protecting cells against disease, boosting immune function, protecting the brain and nervous system, and relieving pain and disease-causing inflammation.
In a separate study on the endocannabinoids published in the journal Pharmacological Reviews in 2006, researchers from the Laboratory of Physiologic Studies at the National Institute on Alcohol Abuse and Alcoholism uncovered even more about the benefits of cannabinoids. These include their ability to promote proper energy metabolism and appetite regulation, treat metabolic disorders, treat multiple sclerosis, and prevent neurodegeneration, among many other conditions. Cannabinoids, whether naturally produced in the body, or ingested from the cannabis plant itself play a vital function in strengthening the immune system and combatting many cancers and disease.
As we have learned, the ECS is vital to the well-functioning of the human body and as with all systems in the human body it requires nourishing in order to function effectively.

Care and Feeding of the Endocannabinoid System

A Systematic Review of Potential Clinical Interventions that Upregulate the Endocannabinoid System
“The endocannabinoid system’s salient homeostatic roles have been summarized as, ’relax, eat, sleep, forget, and protect’. It modulates embryological development, neural plasticity, neuroprotection, immunity and inflammation, apoptosis and carcinogenesis, pain and emotional memory, and most importantly from the viewpoint of recent drug development: hunger, feeding, and metabolism”
“Conclusions:
Many randomized controlled trials identified in this systematic review have been conducted on lifestyle modifications (e.g., exercise, maintenance of ideal body weight) and CAM interventions (e.g., dietary supplements, stress modification, acupuncture, massage and manipulation). In our opinion these are sensible methods of enhancing the endocannabinoid system”
Download the .pdf: Here

“Cannabinoid-mediated tumor killing was shown to involve mostly CB1 signalling: one path converging on an increase of ceramides that leads to the endoplasmic reticulum and oxidative stress”
Studies at Madrid Complutense University have shown that the anti-cancer mechanism of action of THC is caused by the activation of the CB1 receptor in cancerous cells, this creates a build-up of ceramide within the cancerous cell which in turn can lead to programmed cell death.
However, it is becoming apparent that some forms of cancer respond differently to cannabinoids or indeed a combination of cannabinoids, e.g. in gliomas (brain cancers) a combination of THC and CBD seems to be more effective than either THC or CBD alone.
“The expression of CB1 was identified as a positive prognostic factor for disease-free survival in patients with tongue cancer but not prostate cancer, although prostate cancer cells, like other cancer cells, are killed by CB1 or CB2 agonists in vitro”
As both THC and CBD have anti-cancer properties at Bud Buddies we believe both cannabinoids are important in treating cancer.
“CB2 expression has been recently associated with a poor prognosis in Her2/Neu-positive breast cancer, where its presence promoted pro-oncogenic signalling of Her2 at the level of the tyrosine kinase c-Src.”
There are many forms of breast cancer and research indicates that some forms respond very positively to CBD therapy, e.g. estrogen driven. See our section on breast cancer for more information.
“In contrast, triple-negative breast cancer cells (estrogen receptor, progesterone receptor and Her2-negative) were killed by a CB2 agonist. It is obvious from multiple studies that the co-expression of the cannabinoid receptor with receptors of the epidermal growth factor receptor (EGFR) or other growth factor families is crucial for the outcome because the formation of heteromers or signalling crosstalk may reverse normal functions”
Download the .pdf: Here